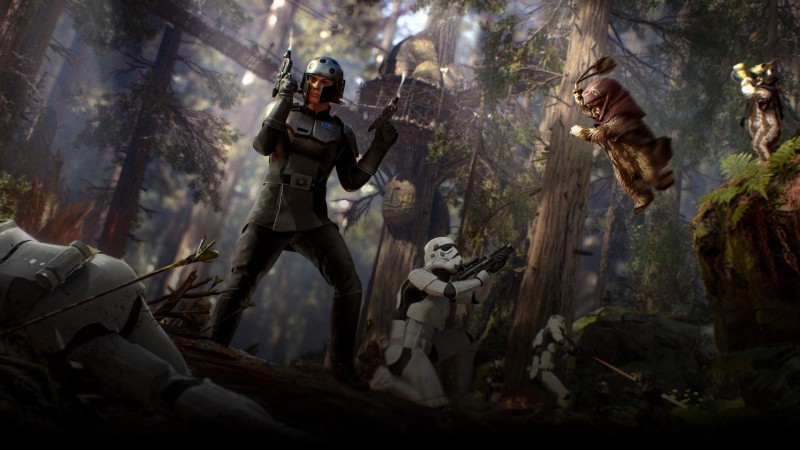 Star Wars Battlefront II has quietly transformed into a success story, moving from the microtransaction-heavy bowels of the sarlaac pit to the comfy seat of a soaring X-Wing carrying a payload of free content. The game's latest update, dubbed The Age of Rebellion, is impressive in size. With the focus on the original trilogy, players can now play cooperatively on the classic locations of Mos Eisley, Yavin IV, Hoth, Jabba's Palace, Endor, the Kessel mines, and the Death Star II. As an added bonus, DICE is making co-op play available on the prequel-era capital ships, the Venator and Dreadnaught.

This update also introduces the Ewok hunter, an infiltrator unit with a bow and arrow, and the ISB agent, a dual-wielding infiltrator. The ISB Agent's final ability regenerates nearby allies' base health, and the Ewok hunter can single out weakened foes.

Players can also bring new weapons into the fray, such as a new blasters like the E-11D and DL-18, as well as the T-21 heavy blaster, and the Cycler Rifle. Heroes vs. Villains skirts the classic trilogy to add playable maps set on the MC85 Star Cruiser and the Resurgent-class Star Destroyer.

The update brings a number of tweaks and fixes, such as modifications to Leia's E11 blaster and Chewbacca's bowcaster. You can find out more at DICE's official Battlefront II forum.